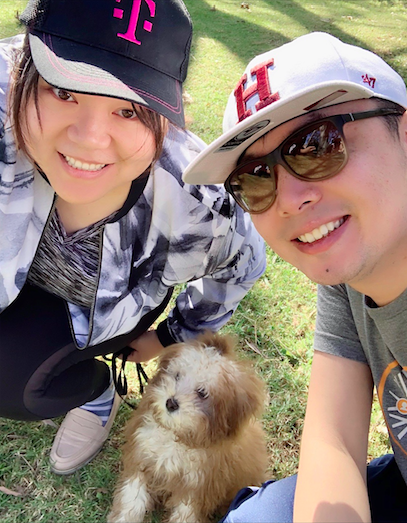 We got Cola last summer as our first puppy.  Although he was pretty food-motivated, he still had a lot of issues such as barking, fear, potty issues, etc. Fortunately we were referred to Felicia as Cola’s trainer.  She impressed us by showing her professionalism at our first private lesson.  As we both work full-time and do not have the flexibility to come home during the day to let Cola out, we hired Felicia as Cola’s private trainer of the Daily In Hope program and we saw our puppy making swift progress along the journey.  She came to our home on a daily basis, spent 30mins with Cola on the basic obedience training and took him out to potty.  She also gave us a lot of feedback even on days when we weren’t able to watch her training Cola. We then signed Cola up for impressive three week board & train program at 6 months of age where he learned advanced obedience. At this point, both ourselves and our friends were all very surprised at Cola’s maturity as a young puppy. Having Felicia as Cola’s trainer has made our life much easier as Cola knows exactly what we want him to do now.  Felicia was also very responsive with Cola’s fear issues and relayed to us almost everything she knew about puppies.  When we had questions that went beyond basic training, she was ready to give us comprehensive responses. We would definitely recommend Felicia and her puppy training program!